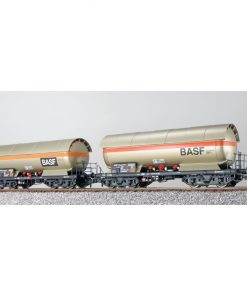 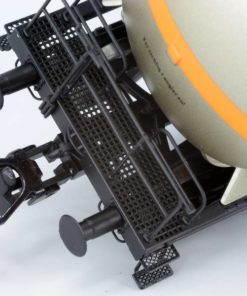 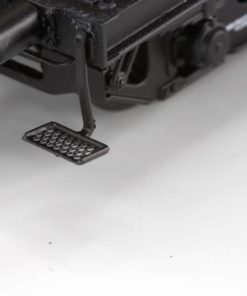 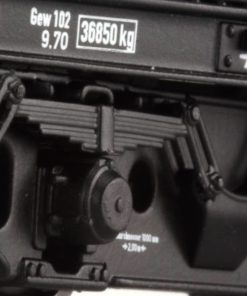 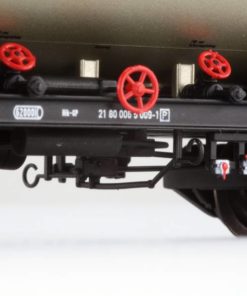 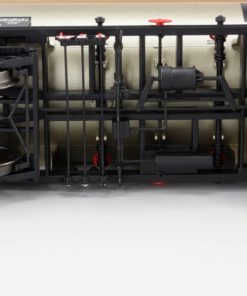 Prototype
For supplying companies and private households with Liquefied gas for heating various companies procured compressed gas tank cars. Since gas pipelines were not yet available everywhere in the 1980s, there were gas warehouses in rural areas, which were tendered by rail and delivered liquefied gases such as propane or butane to the households by truck. In car groups or as single cars are the first with a yellow, from the late 1960s orange-colored belly bandage provided gas tank car in many freight trains on main and side tracks. Many companies in the chemical industry also needed the pressurized gas tank wagons for the shipment of their products and so the wagons often carried large logos of their owner or tenant. In the early 1960s, grayish-white or pebble-gray became increasingly prevalent over the previously used iron gray. Most of the four-axle types had the so-called bottom discharge, meaning that the flanges and valves are located in the area of the boiler bottom.

In the Zag type is coded that the vehicle is a tank car (Z) with four or more axles (a) for compressed, liquefied or pressurized gases (g).

The Pullman model recreates a four-axle 620hl pressurized gas wagon of the Uerdingen wagon factory, which is mainly sold to wagon hire companies such as the Eisenbahn Verkehrsmittel A.G. EVA was delivered. At the manufacturing plant, EVA, later merged into VTG, was a partner. Characteristic of the Uerdinger car with attached sunshield was the comparatively large roof overhang with the radially expiring spacers. The central manhole on the non-handbrake front was common in new buildings until about the mid-1960s.