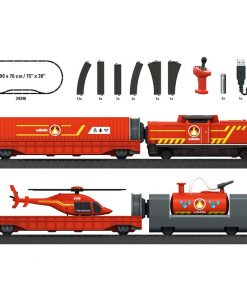 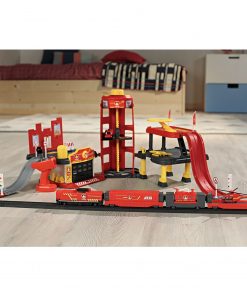 Important! Here comes the fire station and the water being sprayed.
The fire department train comes hurtling around the curve with a loud “tatoo tataa” and you start putting out the fire with the water spray. It’s a good thing that your fire station train has the water tank right on board. Now, it’s all about spraying water. The helicopter is already for use at the end of the train – it can start immediately and lift off for a rescue.

Model: The locomotive has a battery-powered drive and a magnetic coupler on the rear end. The motor, rechargeable battery, and all of the electronics are designed to be inaccessible for children. The locomotive can be recharged with the charging cable included with the set. The locomotive has 3 speed levels in both forward and reverse, 3 sound functions, and triple headlights that can be controlled with the Märklin Power Control Stick designed for children. The container transport car has sturdy containers designed for children. The containers can be opened and loaded. A permanent metal part in the containers enables them to be loaded magnetically, when this set is used with the 72211 Freight Loading Station. The tank car has a manual water spray. Water can be filled in the water tank and can be operated with the manual water spray function. The transport car includes a helicopter as a load. The helicopter has manually operated rotating blades. The freight cars have magnetic couplers designed for children. Train length 59 cm / 23-1/4″.
Contents: The set has 12 sections of curved plastic track, 7 sections of straight plastic track (172 mm / 6-3/4″), 5 sections of straight plastic track (188 mm / 7-13/32″), 2 sections of curved plastic track (turnout curve), and 1 left turnout and 1 right turnout. An easy-to-use wireless Märklin Power Control Stick is included. A USB charging cable for the locomotive and 2 each AAA batteries are included with this set. The train can be operated with 2 different frequencies thus allowing another battery-powered train to be operated with this set at the same time. This set can be expanded with the 23300 plastic track extension set. 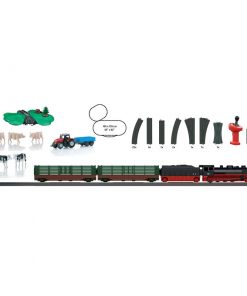 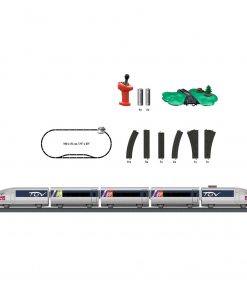 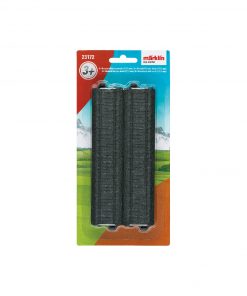 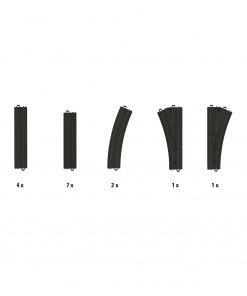 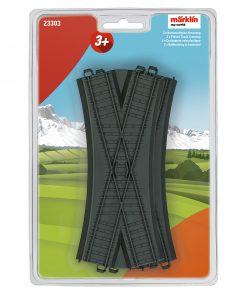 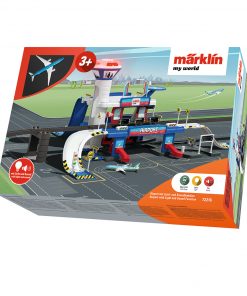 Märklin my world 72216 – Airport with Light and Sound Function 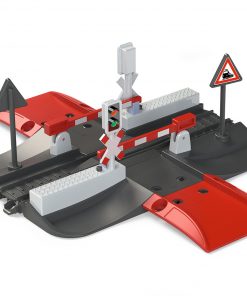 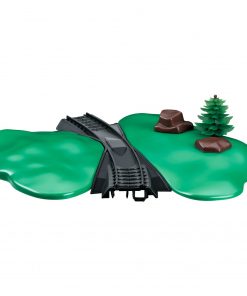